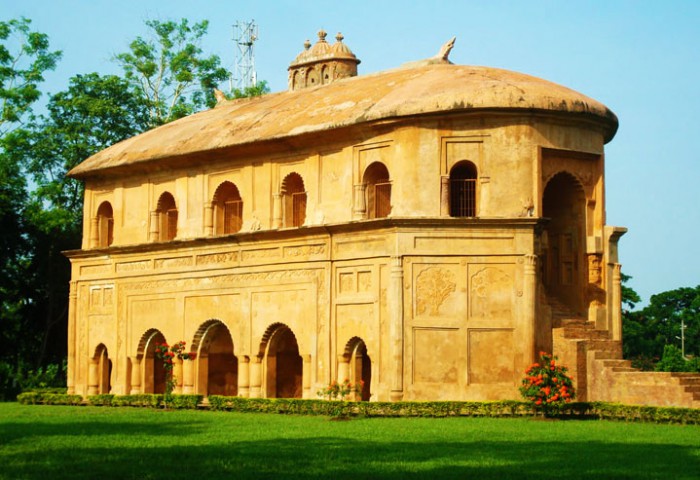 The Sivasagar tank was dug by Queen Ambika in 1734, in memory of her husband Swargadeo Sivasingha. The city of Sivasagar thus derives its name from this historic tank. It is the second largest man made lake in Assam after the nearby Joysagar tank.

Apart from its historical importance, the entire bank of the tank is of prime significance as it has the three Dols, most of the Govt. administrative offices, district prison, a church, a mosque, a buddhist monastery, two colleges, high schools, a museum, a tennis club, parks & gardens, etc. Joysagar, said to be the biggest man-made lake in the country, is spread over 318 acres (1.29 km2) of water on the edge of the town in an area called Rangpur, 5 kilometres (3.1 mi) away from the present town of Sivasagar. This lake was built by Swargadeo Rudra Singha in honour of his mother, Joymoti.

The Ahom queen Bor Kuwori Phuleshwari Devi built this tank, which is spread over 150 acres (0.61 km2).

Swargadeo Lakshmi Singha built this tank, and dedicated it to his father Swargadeo Rudra Singha, in 1773. A Shiva Temple was also built on the bank of this beautifully constructed tank. It is 8 kilometres (5.0 mi) away from the town of Sivasagar. It was built in 1734 by Kuwori Ambika, wife of the Swargadeo Siba Singha. Dedicated to the Hindu god Shiva, this is the most sacred of the three temples. Rising to a height of 104 feet (32 m), it encircles an area of 195 feet (59 m). It is thronged by devotees during the festival of Shivratri. This was also built by Kuwori Ambika. It is dedicated to the Hindu god Vishnu. According to the Hindu calendar, the month of “Bhada” is considered auspicious and sees a greater number of visitors to the Dol, although it remains open throughout the year.

This is dedicated to the Hindu Goddess of Power, Durga. Durga Puja, the most important festival marked at the temple, is celebrated twice a year: in the months of Chaitra (April–May) and Ashwin (September–October). The Talatal Ghar is a palace which was initially built as an army base. It houses two secret tunnels, and three floors below ground level which were used as exit routes during the Ahom wars (and which give the structure its name).

The Talatal Ghar constitutes the below-ground structure of the Rangpur Palace, whose four floors above-ground make up the Kareng Ghar.

In all, the Rangpur Palace is a seven-storied building. Bakhar Bengena: it is a rare breed of tree is situated at Bokota Mouza, and the place name is known as a Bakhar Bengena. Kareng Ghar is located in Rangpur, 4 km from Sivasagar. Of all Ahom ruins, the Kareng Ghar is one of the grandest examples of Ahom architecture. The Kareng Ghar, together with its below-ground counterpart the Talatal Ghar, is also the largest of all Ahom monuments. Charaideo was the first capital of the Ahom kingdom established by the first Ahom king Chao Lung Siu-Ka-Pha in 1228. It is about 30 km from Sibsagar town of Assam of the Sibsagar-Simaluguri road.

Though the capital of the Ahom kingdom moved many times, Charaideo remained the symbolic center. It contains sacred burial grounds of Ahom kings and queens and is also the place of ancestral Gods of the Ahoms. The tombs (Maidams) of Ahom kings and queens at Charaideo hillocks are comparable to the Pyramids of Egypt and are objects of wonder revealing the excellent architecture and skill of the sculptors and masons of Assam of the medieval days.

Other Places of Interest The Church was established in 1845. Dr. & Mrs Clark came to Sivasagar in 1869 with the help of a Chinese mason. It was at this bungalow in 1871, they met the “headhunters” from Molungkimong and discussed about the feasibility of Naga mission with them.

Ajan Fakir, born Shah Miran, also known as Azan Pir, Hazrat Shah Miran, and Shah Milan, was a Sufi Syed, poet, Muslim preacher and saint from the 17th century who came from Baghdad to settle in the Sibsagar area of Assam in the north-eastern part of India, where he helped to unify the people of the Brahmaputra valley, and to reform, reinforce and stabilise Islam in the region of Assam.

Sibsagar has several hotels and guest houses to suit all budgets.